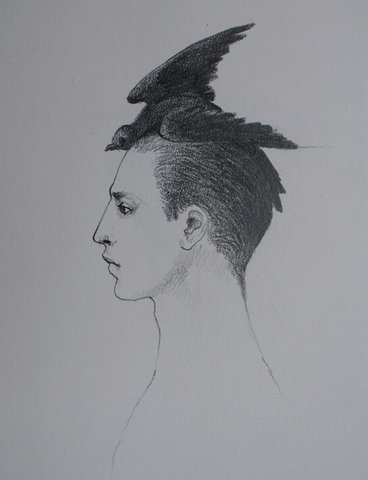 This retrospective exhibition, set up mostly with the work fund and collection belonging to the artist’s family, intends to display the evolution process of his work.
Undoubtedly, drawing was the starting point of all his work, executing it proficiently and, above all, efficiently, becoming one of the most outstanding draftsmen of his generation, thus aligning himself with the artistic tradition of the Renaissance which discovered art's origin in drawing.
In his search for the medium of expression most akin to his interests, and avoiding taking the easy path provided by his innate talent for drawing, he researched engraving and the possibilities of its several techniques, appropriating them decisively to the point of reaching a high performance level in metal engraving, especially etching, aquatint, soft ground, and also  intaglio, which he had no misgivings to combine, and also obtaining outstanding results when merging engraving and drawing (in monotype) as essential resources to express his conceptual propositions and his most refined poetic creation. Indeed, the thorough exploration of media and materials allowed him to attain clearly and with certainty the power and suggestion ability that his intervened monotypes provide, which, in the opinion of experts, signal without any doubt the summit of Colombian art in this technique.
The work of Luis Fernando Mejía Jaramillo was continuously renewed in search of new horizons, something which is clearly visible when confronting the ceaseless variation of his focus of interest.
His neatly fabricated works give the sensation of being thoroughly elaborated, of having been executed with dedication, with the patience of a goldsmith.
Along his work, and through the years, one can see a clear trend to escape the plain line and sometimes, through certain color accents, to definitively give way to the invasive color splotch, from the fixed to the unstable or mutable, from assertions to suggestions, from an extroverted look to pure introversion, and finally, a clear decision to undertake, as professor Carlos Arturo Fernández states, a ceaseless search for “universes of deeper meanings, beyond the shell of what is visible”, something which is expressed, more evidently, in the work generally considered as his masterpiece, Culpables! (Guilty Ones), begun in 1999 and executed mostly with the monotype technique, and to which the artist was devoted with utmost commitment at the time of his death with approximately 90 finished works between drawings, monotypes, engravings and oils, and around which he had planned derivations which sadly chance did not allow him to carry out.
The artist provided both in his life and through his work irrefutable evidence of having gone beyond the shell of what is visible. Evidently, as the great observer that he declared himself to be, almost occupying the owl's position, he devoted himself not only to observe but also to deeply reflect on what he saw, taking us by the hand through his work, availing himself of his exceptional artistic talent and intelligence, in order to show us what he had discovered behind the veil of appearances.